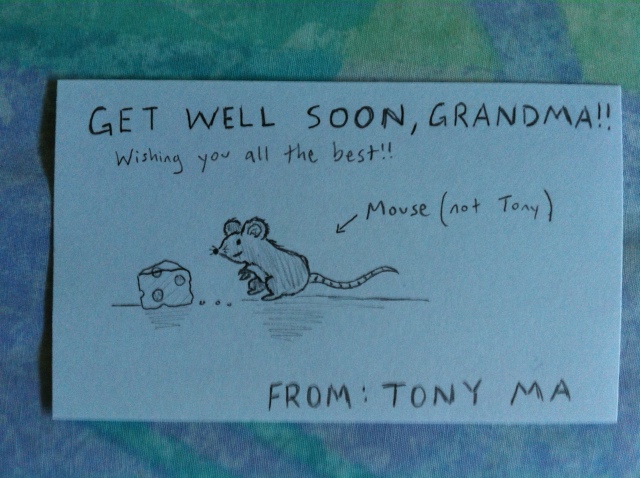 Conversation via iMessage with my brother, Tony:
Tony: Meow I fainted when I got my blood drawn today :0 They had to take me to emergency room on a wheel chair
Me: What. Elaborate plz. I want full story
Tony: Meow scariest thing in my life. Kk so I go into station room thingy and I sooooOoOoOoOo scared right. Kaiser room.
Me: Uh huh
Tony: And so they about to stick needle in so I was like wait plz then I take out this hamster that Jessica (Jane's note: Jessica is his girlfriend) let me borrow to squeeze. So I look away and I’m squeezing the hamster right, and I feel the needle go in and my blood being drawn. The nurse tried to keep my attention away from it by trying to make conversation with me, so she asked me random questions like what my fav sport is
Me: Mmhm
Tony: And so I was talking and then I just stopped cuz I felt my mind and my vision were being blurred out. And I felt like I needed to throw up. And then I was apparently unresponsive. They tried asking me questions but I was gazing into space, so they say.
Me: Whoa
Tony: Then they call down a security and doctor and other ppl down. This lady gave me apple juice.
Me: Hahahaha where was papa
Tony: They made me lay down and they put ice packs behind my neck, on my forehead, and on my chest. Then I started violently shaking or shivering o.O;;  Then they rolled me into wheelchair and brought me upstairs to emergency room. I was all agdsdshda. Omfg and they poked me with a needle and squeezed it when I was gazing. I FELT THAT
Me: HAHAHAHAHA
Tony: I wanted to throw my hamster at them but I couldn’t!
Me: So you were still holding hamster after all this time
Tony: Btw I never let go of the hamster during this whole thing. Ya. And so they hooked me up to some beeping machine, and took my temp, blood pressure and stuff, and made me lay down for a bit. I couldn’t move my body without shaking and my breathing was weird o.o So I lay down for some more and we left and went home and dad made me red noodle cuz I still can’t use my left arm that well.
Tony: Meow now I’m laying down in bed about to get up to eat some Milano cookies and surf da interwebz :3
Tony: Dassit meng

Email ThisBlogThis!Share to TwitterShare to FacebookShare to Pinterest
Labels: Tony

Everybody, when thrown into a new environment that primarily uses Internet Explorer, is bound to do something stupid. During my second day of work, I thought it was strange that I hadn’t received an email all day. I wondered, “It’s my second day and people have already forgotten I exist??” But I just shrugged it off and happily continued doing the reading assignments I was given and becoming re-acquainted with Internet Explorer, a Internet browser I haven’t used in years (Chrome, in my opinion, is infinitely superior).

But I was using Microsoft Outlook, which I’d never used before. And Microsoft Outlook does not refresh automatically unless you a) close and then re-open it, b) configure it to update periodically, or b) tell it to. I did not, obviously, know this because I’ve been spoiled with Gmail. So, when a woman I shadow came by to ask whether I received her numerous emails that day, I said no, I hadn’t gotten an email all day.

Once I refreshed my inbox folders, more than a dozen emails from throughout the day poured in. It was 3 p.m.

“Jane is sorry, everyone! She didn’t think she received any emails today, but she’s catching up on them right now!” the woman I shadow vocally announced to the department, trying to inject a little humor into an obviously mortifying moment for me.

So thanks, Microsoft Outlook, for embarrassing me on my second day at work.

Whenever I go somewhere on that end of town, I often drive by my old high school. Just because.

I miss having small classes and getting to know my teachers well enough to become their Facebook friend. I miss having lively (and pertinent) class discussions. I miss that sense of community.

Everywhere I go, I try to replicate that experience, but that’s like trying to recreate an old friendship after years of separation and change. It’s just not the same.

Maybe that only happens once. Maybe I ought to be glad I made friendships worth reminiscing about in the first place. Or maybe I’m being silly.

My former teacher told me I broke his heart when I decided to accept a job elsewhere. But really, it breaks mine.